Most of the action shots were taken by Sheila from the back of the tandem. Perhaps not at quite the same speed as the television camera-men covering the Tour de France from motorcycles, but they don't have to pedal at the same time and have a bit more
suspension going over the cobbles of the Champs Elysées than that provided by our tandem. Inevitably given the vantage
point many of the photos feature the back of John's head and cycle helmet. 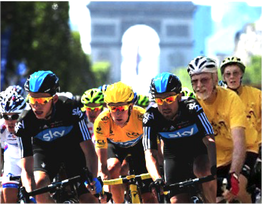